Time for our hero to defend himself in the quest to reach the prize. He needs to shoot his gun.

What will we use for a bullet? There a few choices, but we'll go for particle.png in the orx/tutorial/data/object in the Orx project. And copy this to our data/texture folder.

Once copied, define it in the config:

Any BulletObject that is created will be scaled down a little, sent flying off to to the right, and can only exist for 1 second before being auto-destroyed.

What is the best way to get our hero to shoot lots of these BulletObjects? A spawner is the thing to use.

A spawner can be attached to an object (like our hero). And it can be told to spawn a specific type of object (like a bullet). Let's take this approach to start with. It won't be perfect, but we can always improve it later.

Create a spawner for the hero:

Some words on the above. This spawner can shoot BulletObjects. It can shoot one at a time with 0.1 seconds between shots.

Time to attach it to the HeroObject:

Run it and your hero will be shooting: 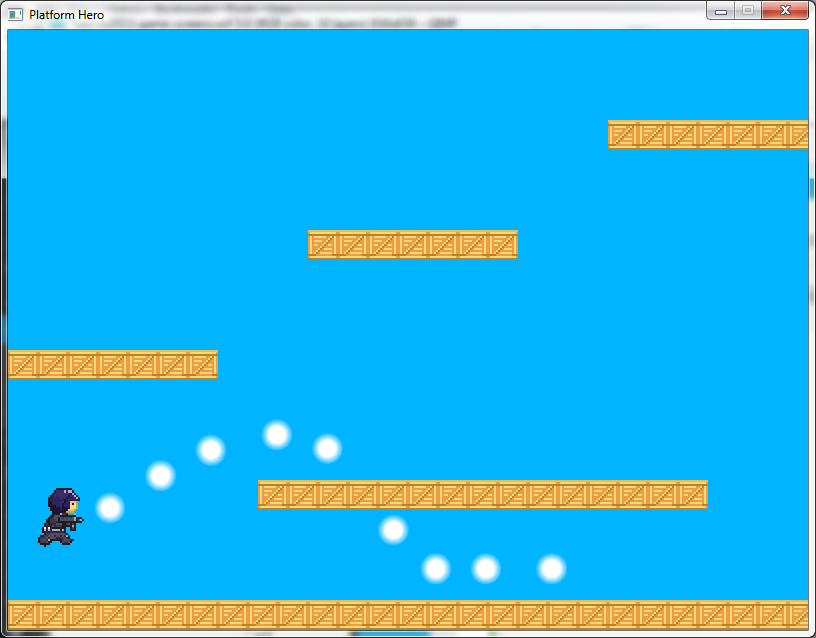 Great so that's working for us. Now, how to stop it from shooting. The function that is available to us for this purpose is: orxObject_Enable()

If we disabled our hero object, yes it would shop him from shooting, but it would also make him disappear. Not quite what is expected.

There are a number of ways to solve this situation. Let's go with a simple one.

What if the HeroObject had a single empty child object? And what if that child object had the spawner? Because it would be invisible, it wouldn't matter if it was turned on or off.

Define an empty object as the hero's gun:

Remove the spawner from the hero object, and make HerosGun a child of HeroObject:

When you run this, you'll notice little difference. Our hero is still firing. But now we can turn his gun off at the bottom of the Init() function.

But we need a reference to the gun in code, which we don't have yet because [HerosGun] was created automatically with HeroObject.

First declare the gun as a variable just like the hero object:

Then, in the Init() function, get the child reference of the gun using the hero object:

Now that you have the reference, turn off the herosGun immediately after creating it:

Cool, he stopped shooting. The last thing, turn on, and off the shooting based on pressing the left control key:

Hmmm… his bullets don't go left when the hero faces left. Change the spawner by adding ObjectSpeed and USeRelativeSpeed properties:

Fantastic! Our hero can now run, jump and shoot.