Trace: • Building the Orx library on a Mac with Code::Blocks
en:tutorials:orx:mac:building_orx_using_codeblocks_for_mac

Building the Orx library on a Mac with Code::Blocks

If you don't have Code::Blocks yet, you can download from here: http://www.codeblocks.org/downloads/binaries#mac

Unlike Codelite, Code::Blocks version 13.12 (the last from 2013) will happily work on all versions of Mac OS X. If you don't want to upgrade your OS to try Codelite, try Code::Blocks instead.

Launch Code::Blocks. If this is the first time you have launched it, you will be asked what compiler to use:

Both compilers listed will alias back to the same one on the Mac. So you can just pick the LLVM if you wish.

Use Code::Blocks to open the workspace at orx/code/build/mac/codeblocks:

Build the default config of Debug by selecting the Build Workspace menu from the Build menu.

Confirm the output of the build to ensure everything built correctly:

Now to change from the Debug|x64 build to the Profile|x64 build on the Workspace tab.

Finally, switch to the Release|x64 configuration and build again.

These are saved to the orx/code/libs/dynamic folder. Use finder to take a look at the output: 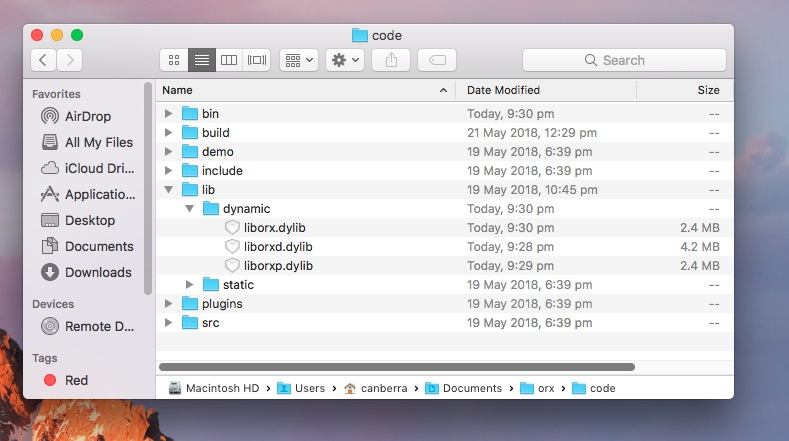 Well done. You have compiled the Orx library which can now be used in your own game projects.

Now we are ready to make a game project of our own.